Another new football inspired slots theme. This one is made by Leander Games. If you’re a hardcore CM (Championship Manager) gamer and like slots. This game is made for you. Choose your own team and spin the slot to see if you can make all the way. The slot game can be played on Betsson, Betsafe and Nordicbet to name a few.

The game includes a Wild Symbol, a Reveal a Star Free Spins Feature and a Dream Team Feature. 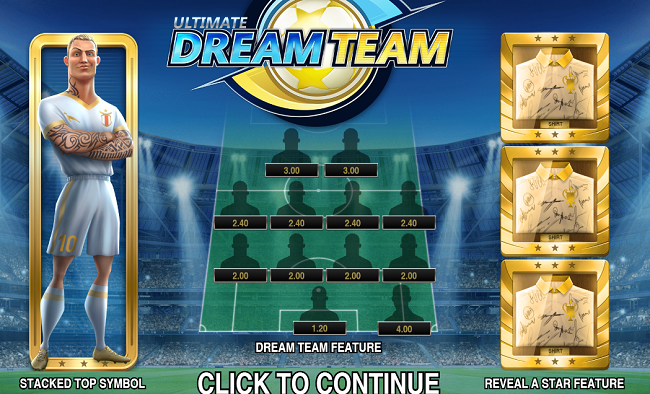 To release the Reveal a Star Free Spins Features on Ultimate Dream Team a a player need Shirt Symbols to appear in the game. 5 free spins will be awarded.

To release the Dream Team Feature 3 instances of the Manager Symbol need to appear during a spin. This will not happen during the Reveal a Star Free Spins mode. A Team sheet will appear and player can assign positions, that will be filled with various prizes. If you happen to pick two yellow cards, the special feature will end.

Summary
All in all Ultiamte Dream Team Slots is a nice game game. The football theme aside it’s a nice graphic game with some nice features. We think that Ultimate Dream Team slot is definitely worth a try. With a 96,5 return to player percentage it’s very similar other slots games payout. Though we would of course see it a little bit higher.